December is the worst. The Holiday season is a time for family, friends and good cheer! It’s not a time for watching videos about the state of the world. Unlike my likely disproved theory of the summer slump, I’ve got two years of empirical verification of the end of year crash in viewership. The graph of this month’s views is super depressing. A very strong start followed by a steady petering out. 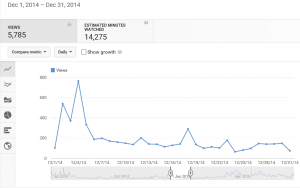 I did know to expect this, however. The same thing happened to my usually robust initial FATCA video in December of 2013, so it wasn’t too depressing to see it happen. It was a fun month of videos though, featuring collaboration, new approaches, and new subject matter. Though I didn’t know it at the time December began my longest period without flying anywhere since the 1990s. Budgetary constraints brought a forcible end to my globe trotting, but I think it was great for the channel. I have spent most of the past six months in a very small room, building my skills and thinking about ways to broaden my reach. There are many worse places to be marooned than Istanbul.

December’s first video was produced in Connecticut at the tail end of my Thanksgiving trip home. Family friend and fellow Istanbul-ite Alev Scott (buy her book!), and my super talented brother (admire his works!) were kind enough to contribute to this long delayed return to the topic of FATCA. This vid on FATCA’s effect on the United States rather than the rest of the world was well received, and gave me my first day over 700 views since July. Next up I did a video on Mary Shelley and how odd it is that she is still viewed as less important than her husband. This was my first foray into literary criticism. I really like how the vid came out, but it took an incredibly frustrating 5 months to crest 100 views. At the time I usually hit that mark in days or weeks, and now occasionally hit it in a number of hours. I want to do more in this vein, but I will have to think harder about how to make the vids easier to discover.

I had long been toying with the idea of partnering with NGOs on videos, and this collaboration with The Sentencing Project, a criminal justice reform NGO, was my first effort. It’s also the last so far. As of this writing it is among the 8 of my 97 videos that have failed to crest 150 views. It may have been the curse of December, or the fact that it’s kind of a crap video (poorly lit, trying to accomplish too many things) but regardless I haven’t felt the need to repeat the experiment. Next up, improv buddy Andrew McCormick (Come See our Shows!) helped me produce a strongly libertarian take on what we should be learning from the Torture Report. My almost instant reaction to Obama’s announcement of a path towards regularization of relations with Cuba was the best viewed of my late December vids. I like to put more effort into my videos, but more timely reaction videos tend to open very well. Next up was a weird combination of a holiday thank you video and a sad reaction to Rudy Giuliani’s attempts to politicize the murders of two New York police officers. Finally I closed the year with a meditation on mass murder and how best to stop it. December was my most prolific month to that point.

The views were disappointing, as I mentioned above. They fell from 7,182 in November to 5,785. This was actually worse than it looks. Half of the month’s views came in the first week. Of the top 5 vids, only one, the new FATCA video, was produced in December. Only two of the seven videos broke 100 views in the first day, and two of them still haven’t broken 200 views six months later. In early December we did finally break 500 subscribers after hovering in the 400s for almost three months, which was nice. At the end of December we had 65 videos, all of which were watched at least 3 times, 51 of which were watched over 10 times, 13 of which were watched over 100 times, and one of which broke 1,000 views for the month (FATCA again). By the end of this month I had decided that if things didn’t change dramatically, and soon, it was time to give up and start looking for another legal job…

November was great. It’s an uncomfortable fact that current events outlets thrive on tragedy and my YouTube channel is no different. My series on the racist US criminal justice system really took off this month. I had been unable to produce it in time to take advantage of the summer’s Ferguson rage, but the grand jury’s decision not to indict Darren Wilson came down at the end of November, and gave me some of my biggest days since the FATCA video’s success trailed off in June. Though the performance of the channel didn’t come anywhere near the May and June heights, it was great to see something kind of work again.

I only managed to produce 5 videos this month. Some issues with power in my Istanbul apartment derailed the production schedule, as did my trip home to the United States for the Thanksgiving holiday. Things generally went according to plan however. The “Our Racist System” series proceeded alternating more detail heavy videos with my own experiences as a white dude getting away with murder (not literally). First up was “Who Gets Arrested”, annoyingly the least watched of the series, which documents the differing jobs that police officers have in different jurisdictions. “Arrested While White:Privilege Edition” told my most outrageous story of white impunity, and was the biggest hit of the month. This may have been due to the use of the “White Privilege” keyword. The importance of the name of a video is a lesson I’m just beginning to incorporate six months later. “How The NYPD Proved That Justice is For Sale” is the closest thing to real reporting that I have ever done. It tells the disturbing story of what happened to the defendants in the high profile “Operation Ivy League” case from 2010 after the media stopped paying attention. “Arrested While White: Finally Arrested Edition” tells the tale of my weekend in jail in New Orleans, and the privileged treatment I received there. We rounded out the month with “Inequality and Incarceration”, which makes the little made but obvious point that we can’t deal with inequality without dealing with mass incarceration.

This was the month I finally figured out Twitter. Since the beginning I had always been posting the vids on the service, but usually only once. I wasted time trying to come up with clever hashtags. Twitter is pitched as a micro-blogging service, but that’s not the point. It’s a direct communication service. You can contact anyone from celebrities to complete strangers who you think might be interested in your product. If you’re pitching something on twitter you need to do so with volume and directness. Last November I finally started doing this, and it represented a real turning point for the channel. If you’re uncharitable you could call my current use of twitter “Spammy”. If someone tweets on the topic covered by the vid, I reply with the video. It’s pretty straightforward, if annoying, and it gets the channel out there. In the past six months of doing this, through thousands of tweets, I’ve only gotten one complaint. The rewards can occasionally be out-sized, but the total yield probably averages about a view or less for each tweet. My channel is still small enough to make spammy tweeting valuable.

At the end of the month I got one ridiculous piece of good luck. Around November 26th the #crimingwhilewhite hashtag became popular. In October and November I produced three “arrested while white” videos that were essentially built for this. An evening of frantic tweeting at my parents’ kitchen table gave me my biggest day of views since July.

Views finally recovered a bit in November. Views jumped from October’s 4,480 to 7,182. Of the top 5 vids, four were produced either in October or November. All of the new crime series vids performed quite well. All of them broke 200 views within a week or two of upload, and three out of 5 broke 100 views on the first day which hadn’t happened much since the Spring. The total channel views finally broke through another 10K mark after not doing so for awhile, steaming past 90,000 views. At the end of November we had 58 videos, all of which were watched at least 3 times, 47 of which over 10 times, 12 of which over 100 times, and 2 of which over 1,000 times. FATCA was finally joined by another 1K+ vid for the first time since June (The White Privilege one at the top of this post). I learned a lot this month, and the uptick in views gave me a lot of hope. Unfortunately December can be the cruelest month for a certain type of video channel…