This was a great month. The six videos produced are all killer, no filler, and it features two of my favorite vids ever, one of which was super successful, and one of which annoyingly continues to fail to find an audience. I also like the range of this month’s vids, from Abortion to TV shows about Vikings.

When I started this channel I promised myself I would never touch two topics: Abortion and Israel. My thinking was that bringing them up was a no-win proposition, guaranteed to lose me half my audience. I started off this month by violating this resolution and covering Abortion with “Purvi Patel and the Truth About Abortion Politics“. I think there’s a fair amount here that both Pro-Life and Pro-Choice people can agree on. It was also fun shooting this with some members of my Improv group The Clap. I’ve actually shot a video on Israel as well, though I doubt that will ever see the light of day.

It may seem silly today, but 13 months ago Jeb Bush really looked like the most likely Republican nominee for President. This prompted me to make April’s second video “Why Jeb Bush Should Not Be President” as a counterpart to my perennially popular “Why Hillary Clinton Should Not Be US President“. Looking at the Jeb video now, I’m kind of amazed at the amount of stuff I have managed to pack into it. In just over three minutes it’s got a pocket history of the Bush family, and the Medici family as well as the rise and fall of the Florentine Republic. Not sure if this style is the best for viewers, but I certainly enjoy it. Makes me think my recent videos have gotten unnecessarily bloated.

Next up is one of my aforementioned favorites, “How Wall Street Killed the State of New York“. It’s well researched, has great visuals, a strong and innovative argument, a good title, a picture of my high school car … and took over a year to pass 200 views. Annoying. Next up was “Vikings and the Rebirth of the History Channel” which may reveal a bit too much about my misspent college years. “3 Reasons China Will Never Rule the World” is another one of my favorites, and one that has happily been super successful as well. It was my fourth video to pass 10,000 views. Fun note about this one, I think it may have experienced the attentions of the Chinese government’s legendary social media army. Throughout its period of fastest viewership, the like and dislike tallies were kept suspiciously close together. The month closed out with “Who Really Runs The United States” which does a bit of presidential history, and points out how the old regional power bases that used to trade the office back and forth are now being replaced by a single massive oligarchy generated in ivy league schools.

April was another good month, though viewership fell from 20,410 in March to 17,963. The bulk of views was once again January 2015’s John Oliver video, but it had fallen of from last month by about 5K. Compensating to some extent was Hillary Clinton’s announcement of her candidacy for president on April 12th, 2015. The “Why Hillary Clinton Should Not Be US President” video had been ticking over slowly since it was produced in July 2014, averaging 100-150 views a month. On April 12th, it got 366 views, and the monthly view count hasn’t fallen below 1,000 since. Here’s a graph. April 2015 is pretty clear. 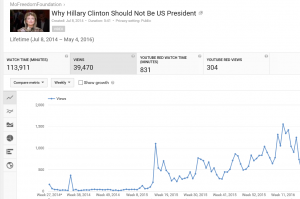 A year later the view count just keeps rising, which I hope it will continue to do through November. Only one of the month’s top five videos was produced in April. Four of the 6 videos produced broke 100 views on the first day (OK the China vid was only 99), and 13 months later all of them have broken 200 views, and 5 of 6 have broken 400. At the end of April 2015 we had 91 videos, all of which were viewed at least twice in April, 76 of which were viewed more than 10 times, 13 of which were viewed more than 100 times, and four(!) of which were viewed more than 1000 times ( FATCA, John Oliver, Hillary Clinton, and Kim Kanye ). At the end of last month I was once again contemplating the prospect of ever advancing view counts and sure success! That’s not what I got in April 2015. It demonstrates the power of a single video. It didn’t matter that April was a bigger month than March on almost every other metric. The biggest vid fell by 5K so that was that. Nertz.